Skip to content
07/10/201001/20/2020
Bloodsucking Cabbies of Manila! Had to go to the Immigration and Visa Office in Manila a few weeks ago to obtain an ACR-I, Alien Certificate Registration card, which will enable me to stay (legally) in the Philippines for another year. The local immigration facilities located in nearby Iloilo City advised me that I had to go to Manila to get my ACR-I. But that's another story. 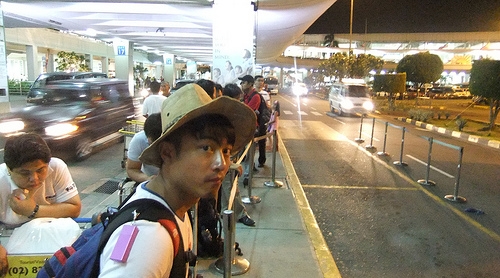 Since my beautiful Filipina wife has three sisters and a brother in the Manila area, and we were going to stay in sister Emily's home which had an air con bedroom, we flew to Manila via Cebu Pacific and actually arrived almost a half hour earlier than scheduled!
Fortunately, my brother-in-law, Joe, picked us up at Manila Ninoy Aquino International Airport, but the horrendous traffic in Manila negated our early arrival time as we had to wait about 90 minutes until he finally arrived. But in Manila, as in many places in the Philippines, one learns to be patient. We climb into Joe's truck and almost three hours later we arrived at Emily and Joe's home in Novaliches.
While in Novaliches in Metro Manila, there was a Fairview SM Mega Mall. Fantastic place to shop with at least triple the places of our usual shopping stop in Iloilo, SM City. The problem was getting home. The first day we shopped there were three bloodsucking cabbies that refused to take us unless we went off the meter. There was no frickin' way I was going off meter! After the third cab driver brushed us off, I was pissed!
I marched over to a security guard standing outside of the mall and explained to him what happened. He strode over to the taxi stand, stuck his head in the next taxi's window and motioned us to come over. I thanked the security officer and attempted to tip him, but he absolutely refused it.
The older cab driver, a pleasant Filipino man, explained that things are quite different than what we are used to back in the provinces. Thirty minutes later we arrived at Emily's subdivision at a cost of around two bucks, USD. I tipped him generously for being so honest, but I was still irritated. Welcome to Manila! Home of bloodsucking cabbies! Tomorrow, Part Two of the dishonest taxi drivers of Manila!
Share
Tweet
Pin
Share
Share
0 Shares
FEATUREDAquinobeautiful filipinacebucebu pacificfilipinoiloiloiloilo cityimmigrationmanilametro manilaphilippinephilippinessm citysubdivision - by The Kano

4 thoughts on “Bloodsucking Cab Drivers of Manila! Part One!”