I'm Giving Up My Spam! Yep, after being one of the staples of my diet these past ten months in the Philippines, I have decided to delete Spam from my grocery list. I've sent a couple of letters and some emails to Hormel, the makers of Spam hoping to get them to sponsor my blog. 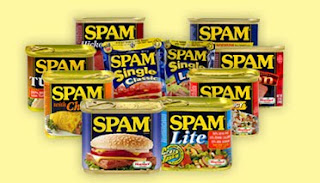 I don't think there are that many old geezers living on the edge of a jungle in the Philippines with Spam a major part of their diet. But since I have not gotten any response from them, and I am in the process of losing weight (over eight pounds in the last week, down to 195 and going for 185), it is time to let the Spam go. I actually had vegetables with rice for lunch today, and I am having some fresh  milk fish tonight.

I'm still doing my one hour daily walk early in the morning, and thought it was wise to add some more healthy routines to my life, so I am starting the eating healthier bit. I am doing this without any prodding whatsoever from The Sainted Patient Wife, who had nagged encouraged me in the past to eat better, but being a man, I did not listen.
And at the age of 58, I doubt that any amount of suggestions from SPW will get me to change any other bad habits I may have, and I think after over ten years of marriage she has probably realized that. Or just given up trying. Oh, don't get me wrong, I may still get the occasional "Dear, don't do that!" when I pick food up from the floor and eat it (she really hates that), but in the Philippines I have to be careful to not accidentally grab a piece of lizard poop by mistake. Or Spam I dropped a couple of months ago.

(Spam is a registered trademark of Hormel Foods Corporation, but you probably already knew that!)