Skip to content
"The Compound" Kids have been out of school for their summer vacation since the first of April, and they return in mid-June. As reported earlier, our twin nieces Michelle and April have graduated from high school and gone to Manila to live with their Mom and Step Dad. The plan was to have them attend Practical Nursing school, but their Step Dad says that the tuition is too high (200 USD per semester each) so April is going to college for IT training, and Michelle will be attending classes for Hotel and Restaurant Management. 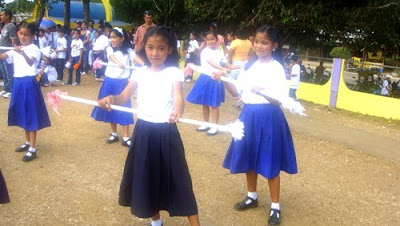 The twins are gone, but my other nieces and nephew remain home all day.  Din Din, nine, pictured in front in the photo, is never a problem. She lives in the nipa hut in our front yard with Joriel, my three year old nephew, "The Terror", and two year old niece JalAmiel, The Sainted Patient Wife's favorite. Din Din is always quiet and helpful. JalAmiel is just so cute and a joy to be around. Joriel, on the other hand, is a different story. He's a boy. He's three. He doesn't run around "The Compound" screaming like a banshee quite as much as he used to, and is going to attend preschool in June, but only for 1 1/2 hours a day. My heart sank when I heard the class was only for such a  short such time, but I guess it's better than nothing.
That leaves my 12 year old niece Shaina who never speaks and her brother Sharwin, age ten. Sharwin is quiet unless Joriel is in his room wrestling with him. If it gets too loud, I just walk by the bedroom Sharwin shares with his lola, grandma, "The Feared Giant Lizard Killer" and glare. That always does the trick. Yeah, I was a kid once and had two younger brothers (no sisters) so I vaguely remember how it was to be a kid. But I'm 58 years old now, and lola's constant burping annoys me enough. I know. I know. I should just "let it go." Sometimes that's hard to do.

10 thoughts on “School Vacation in the Philippines! The Kids Aren’t Driving Me Crazy…Yet!”