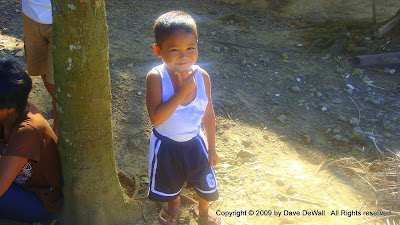 James and The Goat Visit The Compound! The Rooster Crows at 4am! The goat arrived first in this little story. I took the goat’s picture outside of our kitchen window early this morning. It looked right at me as I snapped this photo. My brother-in-law Joery had chased the critter
out of The Sainted Patient Wife’s garden yesterday, so the goat wisely decided to go on the opposite side of “The Compound” today. Now just a reminder for those that like to get a bigger view of a photo, just click on it.  SPW and I have a special little friend (that calls SPW “Dada”) back in Illinois that has two pet goats so I hope she gets to see this picture.
Now James came by later this afternoon with his grandma (lola), and he made the journey from the heart of the jungle,  about a half hour from us. Of course James and his lola are related to The Sainted Patient Wife. I went outside to ask SPW something, and this little boy in a very professional radio announcer’s voice said “Hello, Good afternoon!” I replied “Magandang hapon.” (Good afternoon.) I asked him his name, and he said “James Michael Ragas.”  The boy was not shy at all! He is five, and The Sainted One informs me that the poor little guy’s Father passed away last year due to complications with tuberculosis, (which is a very serious health problem in the Philippines),  and his mother lives in Manila with three of the boy’s siblings. James lives with his grandma in the jungle near where my wife grew up because James’ mother cannot support all the children. The boy is so smart and happy! Always asking questions.  He cracks me up! I just had to take his picture. His lola brought us some bananas over, and when we go out to my father-in-law’s farm this Friday to harvest the rice, we are going to stop by the little guy’s house since he lives on the way. He is quite the ham! I asked James if I could take his picture, and he went into the pose without any prompting! I am just amazed at how happy the boy is despite what he has already gone through in his young life.  SPW said he smiles all the time. What a special child blessed by God!
Walked even farther today on my morning exercise routine, over to the new site and past the Wet Market where I usually stop and turn around. Only been walking for a few days for about an hour at a time, but I feel  better already. Fairly uneventful walk which takes me through the pool hall at the old site and is fairly empty at 7:30 in the morning,  but  I always greet anyone that might be in at that time. On the way home I spoke to a gentleman that was having his motorcycle washed at “The Pit Stop Car Wash.” I saw a car and a motorcycle getting washed yesterday so business is picking up for them. We have not had any significant rain for weeks now, and instead of muddy roads we have dusty ones, so maybe those car wash operators are on to something. I had my doubts when I saw it was going to open, but I am glad to see I was probably wrong about them getting any significant business. But then again, being a Bonehead, I am quite often wrong, and if you doubt that, just ask The Sainted Patient Wife.  Looks like we will be making the shopping trip to Iloilo tomorrow so we can get out of “The Compound” for a while. Thanks for stopping by “The Rooster Crows at 4am!”

2 thoughts on “James and The Goat Visit The Compound! The Rooster Crows at 4am!”