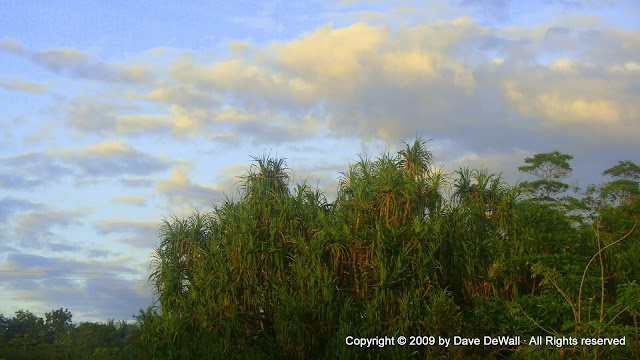 21 Feet Down into a Well in the Philippines! The Rooster Crows at 4am! Exclusive! Before I get to the well story here is a picture from our back yard that I took one late afternoon. The cloud formation over the jungle appealed to me so I decided to take the photo. Again, when I say we live on the edge of a jungle in the Philippines, we really do. Our home at “The Compound” is only about 25 minutes from the heart of the jungle where The Sainted Patient Wife and I will be going to next week to harvest SPW’s father’s rice at the family home place.

In yesterday’s blog I mentioned that our generator was being cranked up for the purpose of making sure it still operated;  it should not sit idle without occasionally being turned on. That’s why I thought it was started, but I discovered yesterday afternoon it was going to be attached to a giant hose so it could suck the water out of the well in our front yard. Seems the mud at the bottom of the 21 foot well needs to be cleaned out every year, and all the water needs to be removed. The water from the well is fed by an underground stream that runs beneath our property.  The generator was cranked up and the smell of diesel fuel drifted through our bedroom window. I was writing my blog at the time, so it is possible I was churning out more crap than usual.

The generator was running about ten minutes with a large contingent from “The Compound” to help in the cleaning process along with our laundry lady’s husband, Rudolpho, and another one of the many thousands of relatives The Sainted Patient Wife has on the island of Guimaras.   As I was preparing to pass out from the fumes, the generator stopped. Whew! Looks like I get a reprieve! I gulped some fresh air, preparing for another onslaught of odors, but never heard anything more from the generator, just a scraping of shovels as mud from the well was being spread around the well area. I ask SPW what was going on, and she said the hose wasn’t sucking up the water like it did last year, so my brother-in-law Joery has to go down a rope 21 feet down to help haul out the water and to scrape the sides of the well clean. Joery always gets the toughest and the dirtiest jobs to do around here, but he the designated handy man. And because he is 20 years younger he is a lot more capable than I am of taking care of the maintenance chores at “The Compound.”
After about a five hour process the well is cleaned.  Thankfully, Joery did not fall into the well at anytime (and thus actually forcing me to do some manual labor if he was incapacitated), and aside from being very filthy, he looks like he has survived the ordeal.  Most of our neighbors come to our well for their fresh drinking water. Some of them do not even boil it as we do, but they still stop by daily to get a fresh supply of water and a trade a little chiz miz (gossip) so the water must be fine to drink, and the gossip must be good. Speaking of chiz miz,  as I write this on a late Sunday morning,  SPW’s cousin Rizal is stopping by with her latest baby. I thought her cousin was not married, but The Sainted One informs me this is her second marriage. I did not know there was even a first marriage because I need a spreadsheet in my Microsoft Works to keep track of all the relatives here and their status. Now since it so difficult to obtain a divorce in the Philippines, I will have to ask my wife later if her cousin Rizal is in the same situation as her Cousin Chris, our cook at the Fiesta that prepared our pig. Cousin Chris’s wife left him for some other guy, so he married someone else on the island without obtaining a divorce. I just live here; I don’t make the rules. Whew! I’ll have to sort this out later after they are all done talking and eating lunch. (SPW update!  Her cousin Rizal was not married before, but is currently married, I am informed that I must have misunderstood what my wife said earlier today about a second marriage. Wisely, I decide not to pursue it and pretend to be the ignorant husband, aka Bonehead. For you younger married guys out there let me give you three words of advice that will make your life much simpler: “let it go!”)
Sunday is the big day for the relatives to stop by. We always have some cousin, aunt, or uncle that makes the rounds on this day. Back when I was in the States I remember as a kid going to my Grandma and Grandpa’s house every Sunday for pot roast, carrots, and potatoes.  It was good eats! The menu was usually the same, aside from the occasional meatloaf. Here the menu is fish, rice, and some vegetables. No pot roast. But Sunday is a great time for getting together with relatives no matter what is being served. When we have visitors here, I just usually pop out of my room and say the following:  “hello,”  “aww, what a cute baby” (if there is one), and then head back to the computer.  Those of you who know me can tell I have not improved on my social skills since I have been here, but every one speaks the local language which I do not understand, and they like to sit around and talk, so why should I butt in?  That’s my reasoning anyway. The kids go back to school tomorrow so things should be quieter this week; we have a shopping trip to Iloilo City planned, and a trip to the beach next Saturday. Looks like a full schedule. Thanks again for your support and for reading “The Rooster Crows at 4am!”

8 thoughts on “21 Feet Down into a Well in the Philippines! The Rooster Crows at 4am! Exclusive!”